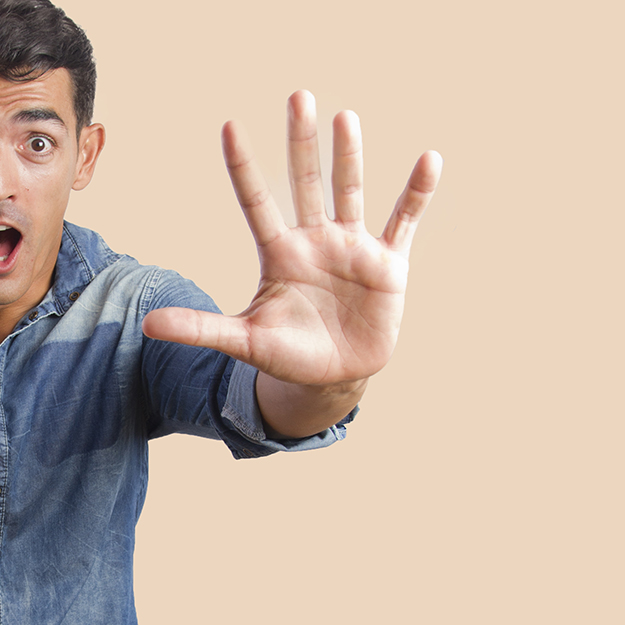 Let’s face it; we’ve all fallen prey to a handsome face, kind smile, great bulge build. Sure, at first glance, he seems like Mr. Absolutely Right. He sweeps you off your cynical feet with witty texts, great dinners and thoughtful gestures. The sex is incredible. You just made his latest selfie the wallpaper on your phone. Yes, you’re ready to introduce him to mom.

Whoa. Hold on there, Mr. Whipped.

Before you fall hook, line and sinker, take a minute and make sure you’re thinking with both your head and your hormones. We’ve done the research, asked around and pulled together a list of bad boys, their call signs and dead giveaways that could reveal that Mr. Perfect might be a real piece of…uh, work.

Mr. Egomaniac
He’s brilliant, accomplished and has an unflagging belief in his own infallibility. You’ll never see him waffling or agonizing about a decision. He’s in charge and, yes−he’s hot. But be warned, that extreme decisiveness usually also means the world revolves around him.
Call Sign: He never tires of talking about himself, his job or pretty much anything he’s interested in. There’s no give and take, just his lecturing. Frankly, He doesn’t care what you have to say. He may listen, but only long enough to prepare for his next lecture
Giveaway: He surrounds himself with ass-kissers, but has few real friends.

Mr. Peter Pan
Though he’s in his 40s, Mr. Peter Pan is still a 20-something at heart. Life’s a nonstop circuit party, and he’s the affable host. He’s on a first-name basis with all the bartenders in town, thinks your 401k is computer stuff and anything from Abercrombie and Fitch is still de rigueur.
Call Sign: No less than 20% of his Instagram posts were snapped at the last few circuit parties. And, his response to all your venting about a bad situation at work is, “C’mon baby, relax and have a bump.”
Giveaway: When the proverbial shit hits the fan…because it will. He will be too exhausted trying to re-balance post-Molly-weekend serotonin levels to be a shoulder to lean on.

Mr. Hook-Up
For him, romance is all but a game. That game being to seek, conquer (and often destroy) his prey. Yes, that would be you. Now, if you’re wise to his ways and just want a quick trick, then game on. But, if you’re looking to date seriously, steer clear.
Call sign: There’s nothing natural about him. He’ll hide behind a veneer of calculated faux-confidence-lines, routines and parlor tricks passed down or from other pick-up artists.
Giveaway: When it comes to sex, he’s done this so many times; he has this old sport down to a science. By the time you light the candle on the nightstand, he’s already naked, condom on and lube in hand.

Mr. Text Message
Texting is a great tool, especially for those of us who want the freedom to converse at our leisure. However, if you meet a guy that continually attempts to have a deep conversation via text, tell him to either call or leave you alone. Bottom line; if he likes you, he’ll call.
Call Sign: You attempt to call him, get his voicemail, and then a text asking what you wanted.
Giveaway: Most conversations you have with him are all but rhetorical. But, as soon as you walk away, he’ll text you and tell you how he’s really feeling, often employing some cryptic series of emoticons to communicate his deepest feelings.

Mr. Grindr
Okay, sure it’s a nifty little app that allows us gays to connect with men in his immediate area. But, if the guy your dating is “just seeing” who is near him at a gay bar, the gym or Whole Foods, he has no real interest in seriously dating you. Now, if you guys are keeping it open, then…go for it. But, if he claims he’s logging into just chat and meet new friends…call bullshit.
Call Sign: He knows more guys in the ‘hood by their profile name, than their actual name
Giveaway: He’s not only on Grindr, Scruff and every other lesser-known geo-social-hook-up-app, he’s paying for premium status on all.

Mr. Sugar Baby:
Hard to spot at first, this guy is attractive, witty, smart, and seemingly successful. You’ll meet him and, can’t for the life of you, believe he’s still single. Well, that’s because he’s not. Sure, you can probably date for weeks, spend time at “his” apartment and even go on weekend getaways. But, somewhere along the line, the name of a “close friend” will keep coming up. He-llo Daddy.
Call Sign: His wardrobe, apartment and travel schedule all add up to a seven-figure salary yet he rarely sets a morning alarm, or even mentions his work.
Giveaway: He’ll disappear to takes calls and dive for his phone when a certain number comes up, often followed by rapid-fire texting through dinners and movies with that same “close friend.”

Mr. Social Media
He’s attached to his phone. And by attached, I mean he keeps it in his hand at all times, waiting for someone to “like” or comment any of his last twelve posts—that he posted in just the last two hours. Mr. Social Media may be a great guy when his eyes aren’t glued to his phone. But, keep in mind; he’ll always be more interested in the virtual reality of his social media persona than he will be in you.
Call Sign: Getting any less than 500 likes on any given post will ruin his day
Giveaway: He sleeps with his phone. Not on the nightstand next to him, but in his hand under his pillow.

Okay, so these are just a few of the bad boys we’ve run across. But, it’s a fact that, the longer you’ve been single, the more prone you are to give one of these out of bounds boys a whirl. But we’ve clearly outlined seven guys you can never date. So remember, if you’ve made a habit of checking your head at the door and following your hormones, we say a better alternative is to take care of the temptation through…uh, manual relief.

Now, it’s your turn. Tell us what bad boys we’ve missed. Visit us on Facebook and Twitter and let us know what other dating dead-ends we can add to the list.