We’re pretty sure we could make a million bucks counseling gay men on what to do and what not to do in their dating/hookup profile photos. But until we finish our business plan, there’s something even better: Lurid Digs. 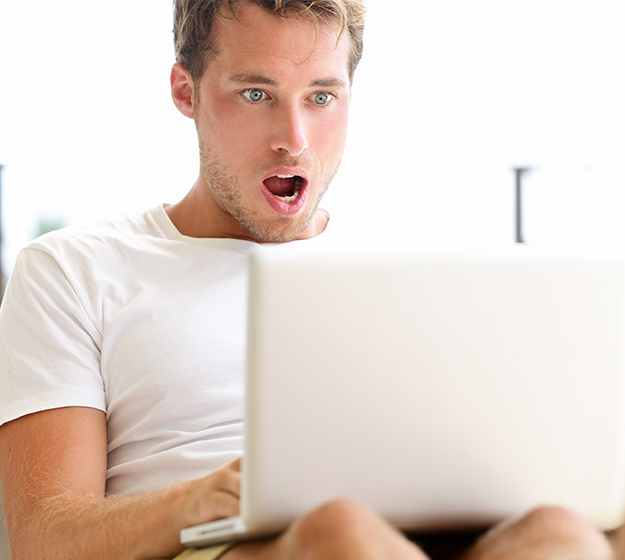 Editor’s Note: Nearly every link in this story is NSFW. Funny as hell, but still NSFW. Consider yourself warned.

We’re pretty sure we could make a million bucks counseling gay men on what to do and what not to do in their dating/hookup profile photos.

But until we finish our business plan, there’s something even better: Lurid Digs (NSFW). A friend turned us onto the site years ago and it’s been one of our obsessions ever since. The site features one horrific profile photo after another, but rather than focusing solely on the physical appearance of the naked dude in the shot, a team of writers turns a scathing eye toward the interiors surrounding all that nudity.

Thankfully, the site’s back with a vengeance and we caught up with Richard and David K, two of the top commentators of all things lurid.

He Said Magazine: How did the idea for Lurid Digs come about?

We assumed the attitude of erudite experts trying to tease out the symbolic meanings from the images. That approach eventually morphed into Lurid Digs once we noted how often we’d become fixated on the interiors in a lot of those images.

HSM: Do you find most of the images in your own trolling of hookup sites and apps or do they come in from other sources?

David: About 80% are submissions from Lurid Digs’ regular readers. They do all of the hard work for us. Just about every email opens with the same line: “I saw this last night on ______ and knew I just had to send it to you guys.”

HSM: How do you get away with showing faces?
Richard: Same as tumblr: by removing photos when asked. However, we like to remind people that the internet is forever. Get used to it. Own the whore inside.

David: Ha! Well, logistically speaking, before the site even launched we ran the concept by a copyright attorney and he instructed us in the rules of ‘fair use‘ — where photos are used strictly for educational or parody purposes. And, of course, Lurid Digs is nothing if not educational.

HSM: Has anyone that’s been featured on Lurid Digs ever contacted you after a critique?
Richard: Of course. Some send romantic cease-and-desist letters, some try to explain their poor decor schemes, and others want to know if anyone has tried to reach them via the “contact us” page.

David: It’s rare that this happens: a request for removal. But we usually will nix an image when the guy is sincere and can show that’s he’s indeed the featured star.

HSM: Your observations are always priceless. You find items in the rooms that are barely noticeable at first glance. It’s like Highlights for Children, except for much more perverted children who happen to be adults. What are the five most shocking things you’ve come across in a photo?
Richard: I don’t know about the five “most shocking” (electrical outlets? wired buttplugs?), but there are a few things that always seem to ruin the shot. Mirrors, for example: they show too much. Collections of stuffed animals: they’re more common than you imagine. Venetian blinds: a boner-killer and a pain to dust. Overflowing ashtrays: it’s 2014, get on the Chantix. And worst of all, kids’ rooms: if your youngest daughter’s bedroom is the only place you can take a sex pic, you need a bigger house. Or fewer daughters.

David: One image I’m still haunted by — and we debated for months about featuring it (but didn’t) — was of a portly guy, nude, erect and sprawled in a chair while a six-month-old baby cooed in a basinet next to him on a ratty couch. The juxtaposition was too off-putting and freaky, even for us.

And then there was the guy hanging by his balls from a chandelier; again, an image I’m haunted by. That went explosively viral at the time we published it; I think it might have even been featured on Gawker and the Drudge Report. Though, sadly, not on Oprah (her loss!).

HSM: After seeing so many horrific profile photos, what advice can you give to guys who may, oh, actually be looking to snag a man?
Richard: Honestly, no house is perfect. Sure, the ones in Architectural Digest may look perfect, but do you ever see people in those shots? Pets? Fuck no. The veneer of serenity would be shattered. The rooms would look lived in, which is apparently the last thing you want in a decor mag.

David: I find any picture shot in a bathroom to be dick-wilting. There’s such a thing as being too intimate. Especially if a toilet is visible; the last great image that featured a toilet was shot by Hitchcock and stared Janet Leigh, and, well, look how awful that turned out – everything since has been a fail. Just don’t go there.

HSM: Are there any other sites under the nightcharm.com umbrella we should know about?
Richard: Well, there’s our latest site Queerpop (NSFW), but you should know about all of them. Just remember: Lurid Digs is the only site under the umbrella that knows about you.

HSM: And now, an exclusive Lurid Digs photo and commentary just for He Said Magazine readers…. 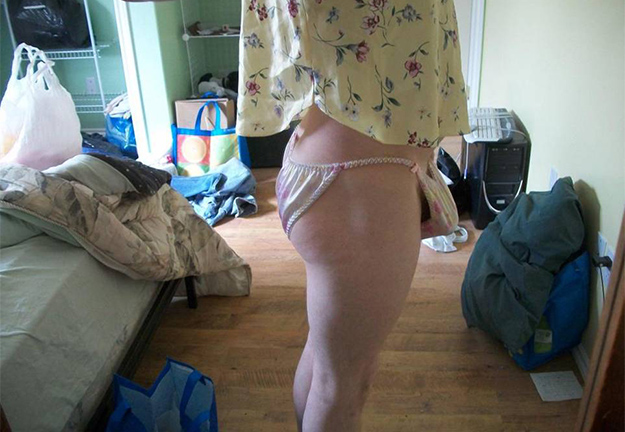 Richard: Working at Lurid Digs is a blast. Between our triple-A-rated naked internship program and the converted wine cellar that now holds our collection of vintage poppers bottles, we manage to entertain ourselves and occasionally, two bi-curious grad students from the Laser Tag place next door. We have a lot of laughs.

But you know doesn’t make us laugh? Homelessness. Sure, Down and Out in Beverly Hills had its moments, but as you can see here, there’s a darker side of homelessness, one that’s full of sacks. Plastic grocery sacks. Reusable shopping sacks. That may even be a knapsack on the floor, the saddest sack of all.

Don’t let saggy sacks like these spoil the internet. With your charitable gift, we can provide the needy with sensible storage solutions and bring sexy back to the web, where it belongs.

David K: I’m the optimist within our team of design experts, so the fact that the bedding and the wall colors are complimentary is worth celebrating, yes? And hardwood Pergo? That’s a ‘thumbs up’ from me too. Now, if only there were furniture; even just a measly throw rug and nightstand from Kmart’s Jaclyn Smith Collection — I could live with that.  Instead we’re staring straight into those grim white wire shelving gizmos, each one telegraphing the same feng shui-challenged message to a visitor: “I like my bedroom to resemble my garage as much as possible.” All that’s missing in this tableau is one of those bright blue crinkly tarps that folks use everywhere in America to cover lawn debris or a ready-for-burial corpse. Oh, wait, Jesus Christ, I think I see one in the closet, to the left. Yep. Another thumbs up.

Richard is a devout homosexualist, a casual vegan and a professional dilettante, the latter of which suits his pre-K attention span to a tee. When he’s not laughing at bright, shiny objects, he often writes about pop culture, marketing, technology and lewder things at Sturtle.com, LuridDigs.com and elsewhere on the web and in print. He lives in New Orleans with his husband, his boyfriend and their four hounds, one of whom thinks he’s a termite.