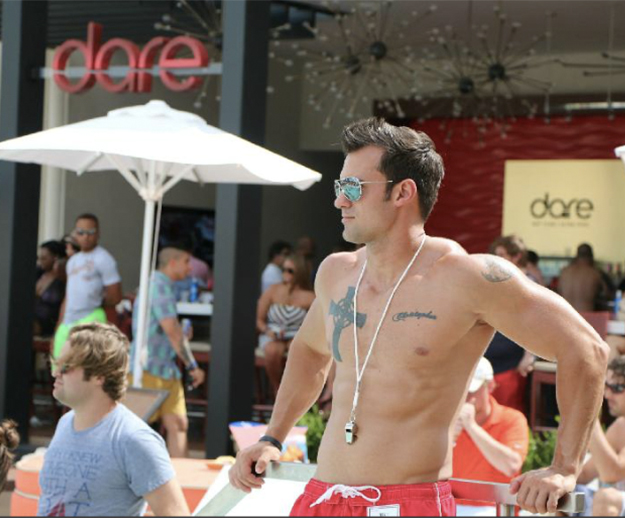 And now that the Horseshoe Casino Hotel has launched the multi-million dollar DARE Day Club | Ultra Pool, there are plenty of non-gambling shenanigans to be had.

The 21-and-over club is open daily, but Saturday is the high point of the week when guest performers take to the stage after resident DJ Handsome Robb sets the mood with a fantastic, high-energy music mix.

We took part in the festivities this past weekend when Taboo from the Black-Eyed Peas headlined and it was quite a scene. A non-stop parade of tits and tats, it’s an assemblage of chiseled physiques right out of Magic Mike, which coincidentally is the nickname of the lifeguard (above).

DARE unleashes a mix of military guys letting loose and bikini-clad women getting their drink while a healthy dose of gays mixes in for good measure (us not included).

Getting a cabana is the best way to experience DARE, and unlike most cabana situations in Dallas, this one’s actually a pretty good bargain.

Book early and a cabana rents for $525 on Saturday with six free admissions. Technically, though, the cabana is free. You simply have to spend an equivalent amount in food and beverages, an easy task split among six thirsty people. Indulge in bottle service for an average of $250 per liter or order cocktails by the glass or pitcher.

Before retiring to your spacious hotel room, hit the casino or one of two delicious upscale restaurants, Jack Binion’s Steak House or Four Winds.

Because after a visual buffet at the pool, best to show restraint and order off a menu.

DARE Day Club | Ultra Lounge
Horseshoe Casino Hotel Bossier City
Daybeds from $150; Cabanas from $300 (depending on day of the week)