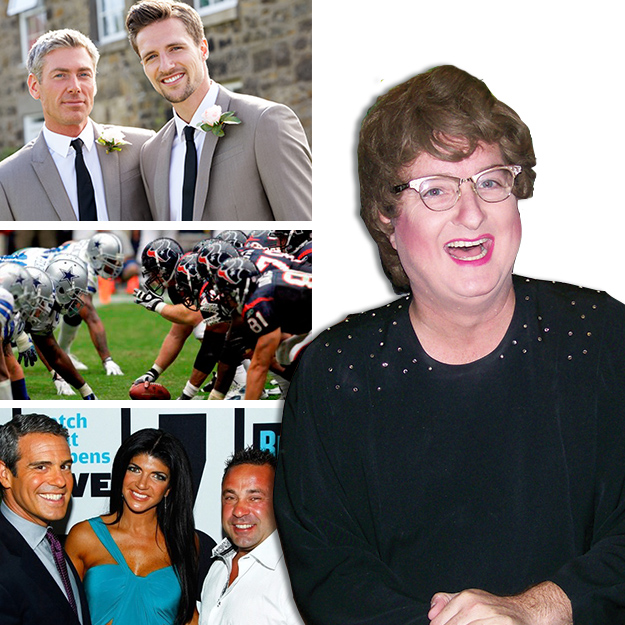 Gay Marriage: Lord help us all! Little John Roberts and the Supremes have hiked up their black robes and climbed up on chairs in abject fear of the MOUSE called gay marriage.  Rather than have to take a stand on this issue, they have declined to consider the lower court cases in five states which ultimately APPROVE of sodomite weddings. With this lack of action, the Supremes have paved the way for same-sex filth in Indiana, Oklahoma, Utah, Virginia and Wisconsin. Let me just break this down. Hossier Okies Marrying Founding Father Mormons with Cheese. The Rapture Draweth Nigh!

Dallas Cowboys: This past weekend brought a veritable Civil War to the football masses in Texas, pitting Dallas against Houston. While I don’t have a Christian interest in either team, those that do care seemed to be aghast that Dallas has recently been on a winning streak and also won this Civil War of the State over Houston. Dallas Quarterback, Tony Homo, er, Romo, was quoted as being “just as surprised as anyone.” I would like to point out that the Cowboys’ string of luck seems to have started after signing the Sodomite, Michael Sam, to the team. The Lord moves in mysterious ways indeed. Hallelujah.

Andy Cohen: I have long rended my clothing and gnashed my teeth over so-called “reality” television. How the Almighty could allow such televised filth to not only be fruitful, but to multiply, is one of life’s great mysteries. That seemingly precious Jewish boy, Andy Cohen, is the evil apex of this form of “entertainment” with his Real Housewives franchises. I have been praying that this reign of filth would come to an end. Now we read that one of the Housewives of New Jersey and her filthy husband have been sentenced to prison. Thank you Lord for hearing my prayer, but this is only a start. Let the record show…if remaining on my knees before Andy Cohen is needed, I shall take up that burden with dedication. Testify!

Sister Helen Holy of the First Southern Fried, Self-Satisfied Baptist Church is the arbiter of all that’s good and Christian in this world. When not ministering to heathens at events on dry land nationwide, she can frequently be found taking her ministry to the high seas on RSVP Cruises, where she spends most of the week on her knees “in prayer.” Be sure to follow Sister Helen Holy on Facebook at www.facebook.com/helen.holy.