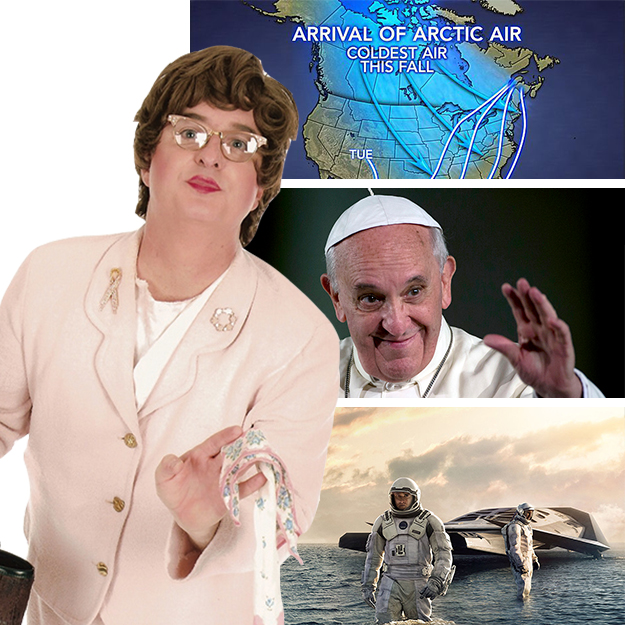 Polar Vortex: The Polar Vortex is upon us. Either the Lord Almighty is sending his wrath on a sinful nation OR a certain Disney movie just showed up on the Heavenly Netflix. Let It Go.

The Pope: More drama from the man in a dress named Francis. Apparently, Sister Pope is squashing dissenters with a firm yet fashionable Prada flat. Cardinal Raymond Burke, a leading conservative American Cardinal who has spoken against the recent “welcoming” of sodomites to the church, has been reassigned to the position of Patron of the Order of Malta. Or, to put it in laymen’s terms, Third Spear Carrier From The Left. Brothers and Sisters, this demotion is the papal equivalent of the Pope saying, “Girl…No.”

Interstellar: My Sunday School class recently met to view the film, INTERSTELLAR. We are each, individually, praying for a return and renewal of those three hours which were taken from us. I, personally, needed a map to get out of that film. However, I am henceforth unable to enter our church library for fear that someone other than Jesus is looking back at me from the Bibles on the shelf. Not alright, alright, alright.