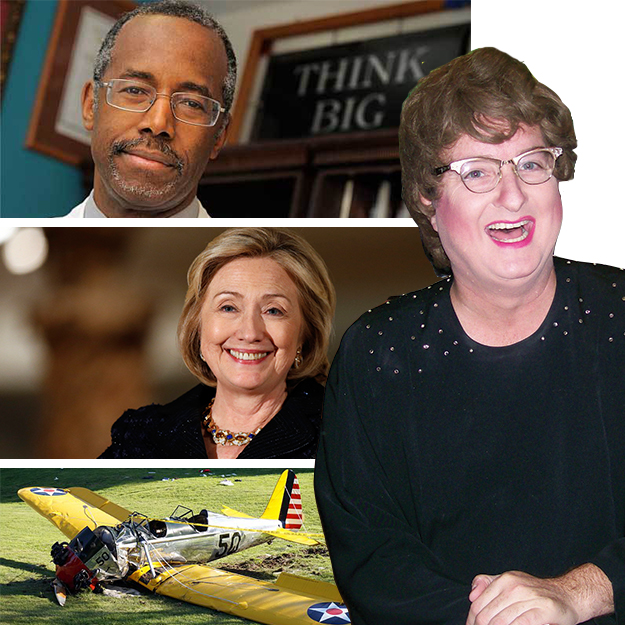 Ben Carson: Brother Ben Carson, retired neurosurgeon and 2016 GOP candidate for president has claimed, in all his neuroscience knowledge, that being gay is indeed a choice. And to prove his ever so scientific theory, Brother Ben claimed, and I quote, “… a lot of people who go into prison go into prison straight — and when they come out, they’re gay.” What a blessing to have such a man of God and brilliant scientist helping the fallen to understand these complex matters. At the recent Academy Awards, Brother John Legend pointed out that “There are more black men under correctional control today than there were under slavery in 1850.” I am therefore anticipating Brother Carson’s equally scientific claim that being black is a choice.

Hillary Clinton: Sister Hillary Clinton has been called on the carpet for using a private e-mail server while she was Secretary of State. Is there no more privacy in this world? Sometimes a Sister just needs to send a quick note to her husband about world affairs, without “Big Brother” snooping in. Animosity towards this very strong woman has been so great, we will soon be hearing rumors that Sister Hillary brought her own toilet paper to the White House and passed government secrets through her poop. Scandal!

Harrison Ford: Let us lift Brother Harrison Ford up in prayer. I have been relieved to hear that he is expected to recover from his recent crash landing of his vintage World War II plane on a golf course in Southern California. My prayer is that he not make any such error again in the future. Clearly, this is what happens when you’re late for tee time of a Star Wars charity golf tournament and you let Carrie Fisher drive.