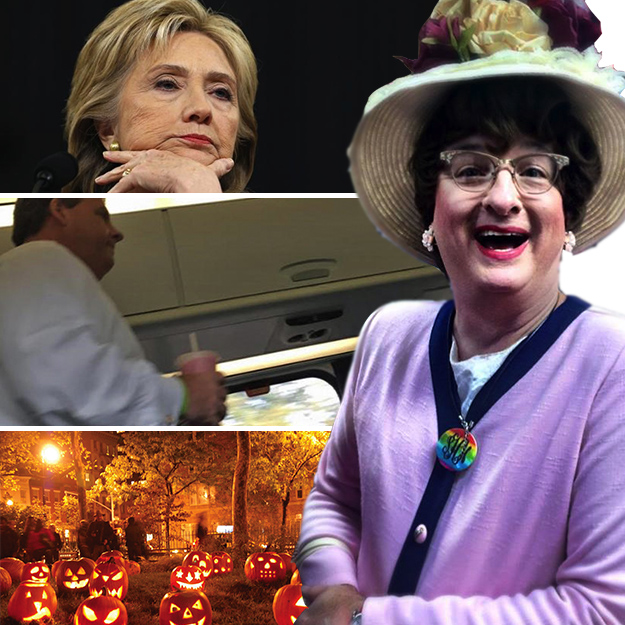 Join me in prayer, Brothers and Sisters, as we reflect on this week in the world.

Benghazi: Poor Hillary Clinton. She has been given the amazing power to wad people’s panties very tightly. Many fine Christian people watched the Benghazi hearings expecting to see Sister Clinton vilified in a barrage of damning questions and accusations. On the contrary, the inquisitors themselves ended up looking like political Pharisees trying to stump our Lord himself in the Gospels. I daresay that these Pharisees succeeded in only one thing. Sister Hillary, the liberal feminist herself, came out of this looking like cool, calm, collected, Presidential material. If she wins next year, she owes some of these inquisitors some favors.  Hallelujah!

Bingers: New Jersey Governor and food lover, Chris Christie, recently caused a ruckus on an Amtrak train from DC bound for New York. Waddling onto the train with a McDonald’s strawberry smoothie, Brother Christie found himself a wide berth on the “quiet car,” a blessed perk offered by Amtrak for those who wish to have some peace in a “no cell phone” environment. Alas, Big Chris was unaware of these rules and proceeded to speak loudly and obnoxiously (or for him, normal conversation) on his cell phone. Passengers complained and he was courteous enough to move to the next car, which was, unfortunately, the dining car. It is my prayer that someone said Grace before the food ran out. Glory!

Boo!: That filthy holiday is upon us once again. Halloween. Where adults encourage their children to dress up as scary creatures and go door-to-door soliciting handouts of candy. Clearly a Democrat creation. All the goblins. All the ghosts. It’s just all too underworldly for me. Worse yet, adults who are trying to drag parts of their childhood with them will find pleasure in dressing up as scary current event characters. The world already has ONE Caitlyn Jenner and ONE Kim Davis. Do we really need scads more on October 31? Let us pray.

Sister Helen Holy of the First Southern Fried, Self-Satisfied Baptist Church is the arbiter of all that’s good and Christian in this world. When not ministering to heathens at events on dry land nationwide, she can frequently be found taking her ministry to the high seas on RSVP Cruises, where she spends most of the week on her knees “in prayer.” Be sure to follow Sister Helen Holy on Facebook at www.facebook.com/helen.holy.