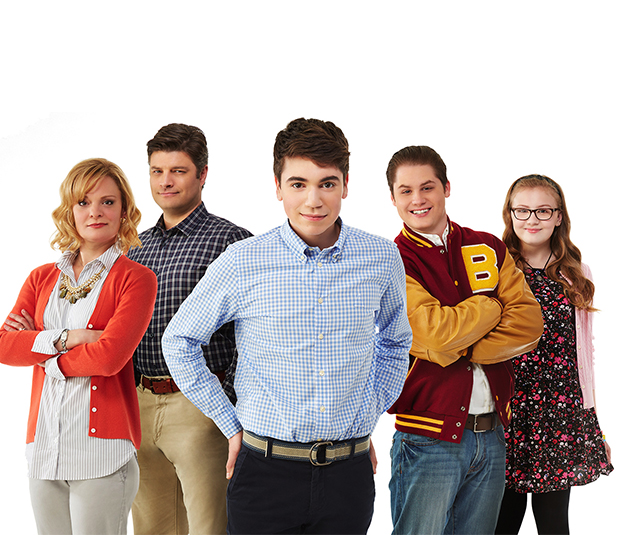 Those three things make us happy on so many different levels, but when all combined, it’s practically a religious experience.

Get ready for The Real O’Neals, an outrageous new comedy about a perfect-on-the-outside Irish Catholic family with plenty of secrets. Mom and Dad want a divorce, son Kenny is gay, Jimmy has manorexia and daughter Shannon raises money for the poor but uses the funds for her own material needs. Try hiding all that from your friends, neighbors and priest.

One of the executive producers is the outrageous, outspoken, out-out Dan Savage so you know it’s gonna be unapologetically gay, gay, gay. Breakout child star Bebe Wood is back on the small screen from the short-lived NBC comedy, The New Normal, putting her higher up the ladder of gay icons to be.

You need only watch 15 seconds of the sitcom’s promo to know that The Real O’Neals is definitely polarizing and will offend many, but that’s exactly why we love it. It’s an anti-politically-correct view of American life that doesn’t come from the mouth of Donald Trump, so that’s a welcome change, too.

But when it comes right down to it, all you need to know is that Martha Plimpton’s in it. She’s a comedic goddess and we could watch her in anything. Raising Hope is in permanent rotation on our Netflix queue and we’ll be adding this one to our Hulu list immediately.

So, if you like your comedy with a bit of an edge, keep watching America’s Funniest Home Videos. If you like it with a lot of edge, check out The Real O’Neals tonight. They’re airing two episodes to give you a nice taste.

Speaking of, please pass the syrup for our stack of saviorcakes.