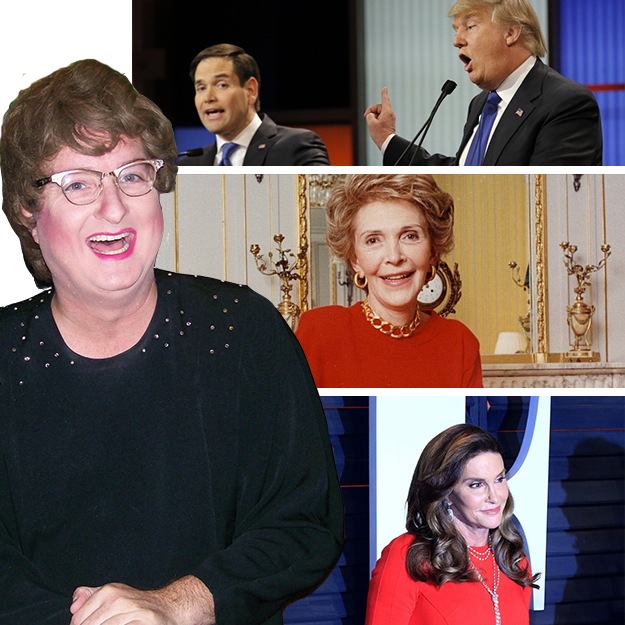 So much to reflect on this week. Join me as I dive into the murky waters of current events.

Penis: Lord, PLEASE let me get through one week without having to say anything about Donald Trump! Clearly, it won’t be THIS week. The most recent Repugnicant Debate just made me gag. It’s bad enough that these children love to yell at each other and call each other names. However, when Marco Rubio suggested that Brother Trump’s small hands were indicative of other bodily “shortcomings”, I had to upchuck. First of all, Brother Rubio is a Mexican (Cuban. Whatever.) who has sung his share of show tunes in his past, so bringing up the Donald’s Willie is rather suspect. Worse yet, having Brother Trump hold up his hands and declare that he has no other issues of size just sent me over the edge. Let me just say two things here. First of all, clearly little Donnie has had NO complaints since he seems to have no problem dating or marrying any number of skanks. Second of all, quite frankly, I’m far more interested in laying hands on Brother Marco’s Cuban cigar. Babalu!

Passings: I would like to honor the passing of a glamorous little First Lady. Sister Nancy Reagan and I rarely bumped in to each other at church events, but I did admire her style and devotion to her memory deprived husband. Moreover, as she reached the age of “I-don’t-care-what-other-people-think”, her candor on the current state of the GOP was refreshing. Still, I can’t help but wonder about the reunions she is having in Heaven. Will Ronnie finally remember who she is? Will scores of deceased addicts meet her at the Pearly Gates and “just say no”? And most importantly, how will she react when she sees that St. Peter is on a break and has left Rock Hudson in charge of admissions? Let us pray.

Pontiacs: Former Olympic gold medalist turned woman, Caitlyn Jenner, continues to stay in the spotlight. Most recently, Sister Jenner announced support for Ted Cruz in the Presidential race, and that she would like to become Brother Cruz’s “Trans Ambassador”. Fellow Americans, I can’t make this stuff up. I can honestly say that the more likely scenario here is that Caitlyn will end up driving a Trans Am for Teddy when he loses the race. But what do I know? Praise!