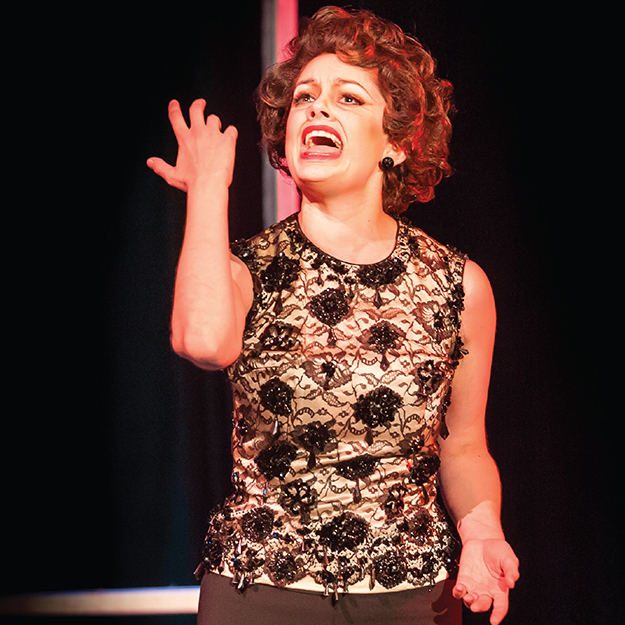 If there were a “Last Supper” painting of gay icons, many would argue that Judy Garland should be front and center. Her arms spread like Jesus, the Gagas and Madonnas and Streisands would most certainly be looking on in quiet adoration.

Judy Garland’s almost larger-than-life legend is something that older generations of gay men have embellished with both great reverence and good-natured mockery in the decades since her death.

When End of the Rainbow opens this week, Uptown Players will present a look at the final months of the superstar’s life and career, which will serve as a Judy Garland refresher course for some and a “Judy 101” primer for the under-40 set who may know little to nothing about her.

Janelle Lutz stars as Judy Garland, reprising a role she tackled in Uptown Players’ production of The Boy From Oz two years ago, nearly stealing the show with her spot-on embodiment. Her portrayal was far beyond impersonation.

So we’re thrilled to see her back onstage with a full musical drama focused squarely on her portrayal of Judy’s tumultuous personal life, including failed marriages, drug addiction, and suicide attempts. (Oh my.)

Much like The Wizard of Oz, life isn’t all black-and-white.

That’s why we need shows like End of the Rainbow to fill in all the colorful times in-between.

End of the Rainbow
Written by Peter Quilter
April 1 to 17, 2016
Thursday, Fridays and Saturdays at 8pm
Sundays at 2pm (no performance April 3)
Tickets: $30 – $45
www.uptownplayers.org

He Said Magazine Giveaway:
We are giving our loyal subscribers a chance to win tickets to Uptown Players End of the Rainbow.

Enter here for your chance to win by 11:59 p.m. on March 31. Winners selected at random. We will email you if you’re a winner, so check your email.