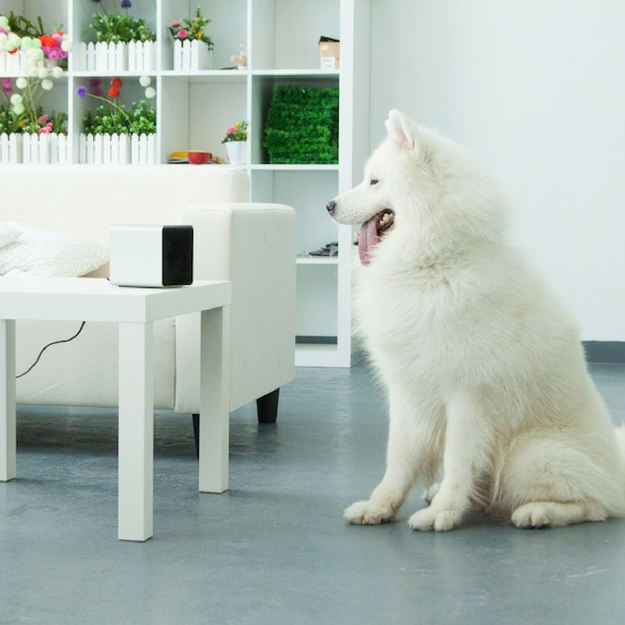 For years, we’ve suspected our dogs’ daily routine was one of pure indulgent leisure, but we never knew for sure.

Until we got Petcube.

After seeing ads on Facebook for weeks, we reached out to the makers of the high-tech gizmo and asked to test one out. Our Petcube (in the brand-new carbon black) arrived one day before we went on a week-long vacation, so the timing was excellent.

(We have major doggie withdrawals when we travel, so this is easily the most awesome product ever invented.)

After a quick setup and connection to our home network, we downloaded the app to our iPhone and within minutes we had a live feed of our living room.

We checked in on the pooches from the plane, the beach and every hotel room on our journey and just as expected, there was lots and lots of sleeping going on.

At least until we turned on the sound and began calling our dogs by name. They were a little confused at first, but they’ve grown accustomed to us waking them from their slumber to say a little Hi-dee-hoo to them.

Petcube also includes a laser function that’s controlled from the smartphone app, so you can have your dog, cat or laser-loving ferrets chase the light for a little much-needed exercise. Ours haven’t quite grasped the concept of chasing the red beam yet, but they’re definitely intrigued.

Even cooler, you can take photos and videos of your long-distance interactions.

We also like being able to check in on the house while we’re gone for security purposes. At least until we caught our housesitter lying naked on the couch watching men’s gymnastics, which felt just a little creepy.

But it sure is fun to watch him chase the laser.