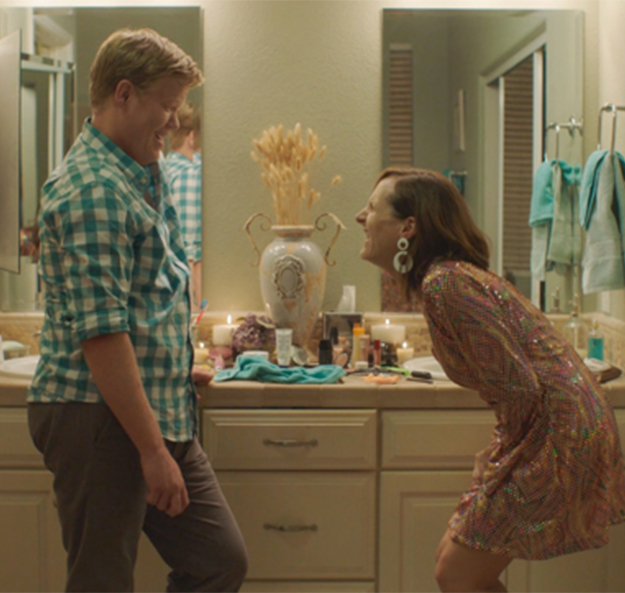 We once missed an international flight because of Molly Shannon.

Huddled around a laptop watching a preview episode of the soon-to-fail US version of Kath & Kim with our boyfriend, we missed the numerous announcements of final boarding calls. All because we were laughing hysterically at Molly.

But it was worth every minute of gate agent scorn when we showed up for our departed flight.

In fact, we don’t think the actress has every been in anything we haven’t adored immensely. So when presented with the opportunity to screen Other People in advance of today’s opening, we jumped at the chance.

Within seconds of the emotionally devastating opening scene, all it took was a couple bean burritos to turn sorrow into laughter. To be fair, the giggles in this particular moment weren’t because of Shannon herself, far from it, but the tone was set for a dark comedy with a huge heart.

Other People stars Jesse Plemons (Fargo, season two) as a comedy writer who returns home to Sacramento to be with his family as his beloved, free-spirited mom (Shannon) succumbs to cancer. Not wanting to tell her that he’s broken up with his boyfriend for fear of making her worry, he keeps up the charade that he’s still in a great relationship.

Returning home isn’t easy, either. The gay bars suck. Grindr doesn’t have much to offer. And his conservative father still won’t acknowledge that his only son is queer.

Though this role is easily one of the most serious and challenging for Shannon, she still exudes a lightness of spirit, even in the film’s darkest moments. Her huge, toothy smile is all it takes to instantly warm the soul, but there’s so, so, so much more to her performance and she definitely deserves some major awards recognition.

It’s time the Academy gets hooked on Molly, too.

Other People
Out today in select theaters nationwide
www.facebook.com/otherpeoplefilm