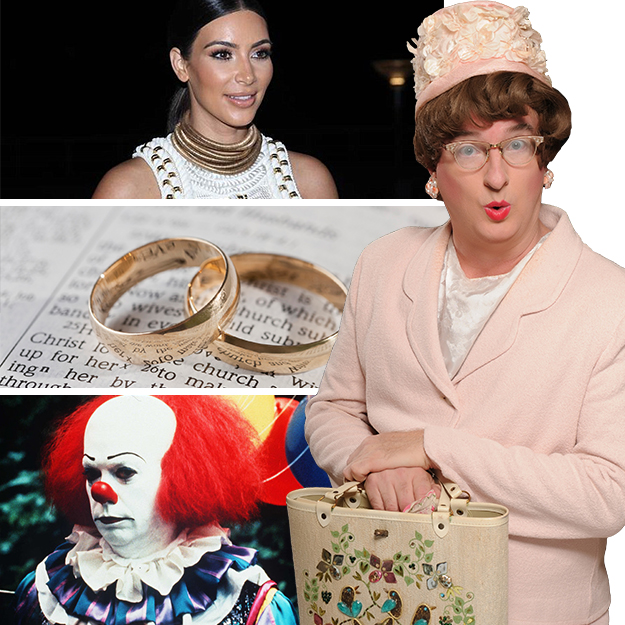 Let us comfort one another as we ponder these happenings in our world.

Kardashians: Let us pray for Sister Kim Kardashian. She was recently tied up and robbed in a rented Paris apartment, losing millions of dollars of jewelry in the process. I am praying that she find strength to recover from this personal violation. After all, the other times Sister Kim has been tied up by men, she’s always RECEIVED jewelry. Let us pray.

Couples: Much has been said about the scourge of gay marriage, but let us turn our eyes to the sanctity of heterosexual marriage. There is a dating agency which matches people looking for love outside of their own generation. Two such people in Florida, a 68-year old man and a 24-year old woman, met this way and fell in love. This May/December romance went all the way to the altar, and the couple were recently married. Now, stay with me, this is where it all derails. AFTER tying the knot, the young bride was looking through her betrothed’s old family photos and saw a photo of her own father. The man she married had children from a first marriage with whom he had lost contact. The young bride happened to be the daughter of his long lost son. Brothers and Sisters, this young woman unknowingly married her biological grandfather. Based on the familial leanings of many marriages in the Old Testament, this couple is surely holding high the biblical standard. Praise!

Clowns: There has recently been a rash of clown sightings in our great land. Although clowns were historically characters to invoke laughter, the satanic influences in our entertainment industry have made clowns a menace. Reports of scary clowns appearing in the headlights of cars on desolate roads, clowns luring people into wooded areas, or even Home Depot, selling a creepy, peeping tom clown which can stick to the window. Perhaps it’s all just an overblown hoax. But I’ll tell you this, Brothers and Sisters…there’s a clown running for President right now that scares me far more. AAARRRRGGGGHHHHHH!!!!!