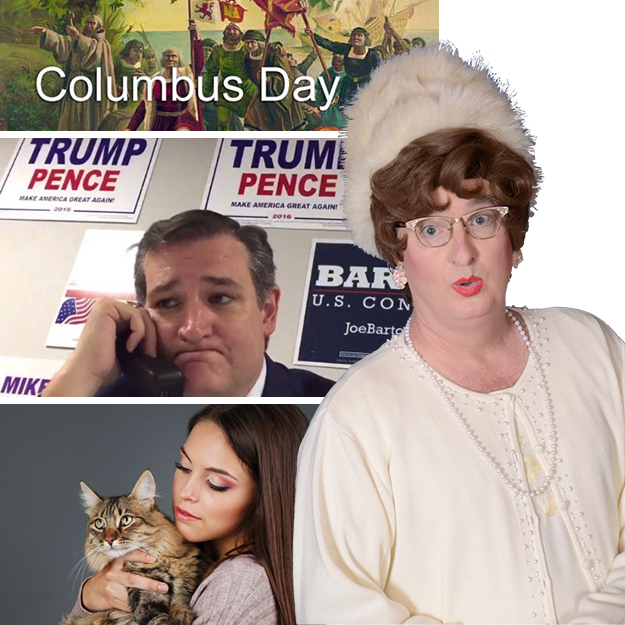 I am growing weary of politics. And yet, it seems to be a topic rife with prayer opportunities. Let us all get on our knees and ponder these thoughts.

Columbus: Americans across this great country celebrated Columbus Day this week. Banks were closed. Mail service suspended. Government workers were idle…legally. All this to recognize an Italian who convinced some Queen in Spain to give him funds to sail uncharted waters in search of a new world. Praise the Lord that there isn’t a national holiday for every person who has ever borrowed money from a Queen in order to take a cruise. Ahoy!

Cruz: Let us pause in prayer for Brother Ted Cruz. Driven to win the Republican nomination for President, he laid waste many in his path to glory. Ultimately, however, Teddy was no match for the Donald, and lost the race to the Orange Windbag. I recall recoiling at some of Brother Cruz’s tactics and comments during the primaries and thinking that his behaviors would somehow come back to haunt him. Well, Brothers and Sisters, let us observe. Ted Cruz was working the phones for the Trump campaign this past week, and not with a smile on his face Clearly, Donald tore down his wall long enough to get this immigrant to work for him. You know, I don’t like to use words outside of my Christian lexicon, but let us recognize the word of the day. Karma.

Cats: I just don’t get it. Why in the WORLD would Donald Trump want to take women’s cats? Next thing you know, he’ll be coming after dogs and goldfish. Let us pray.