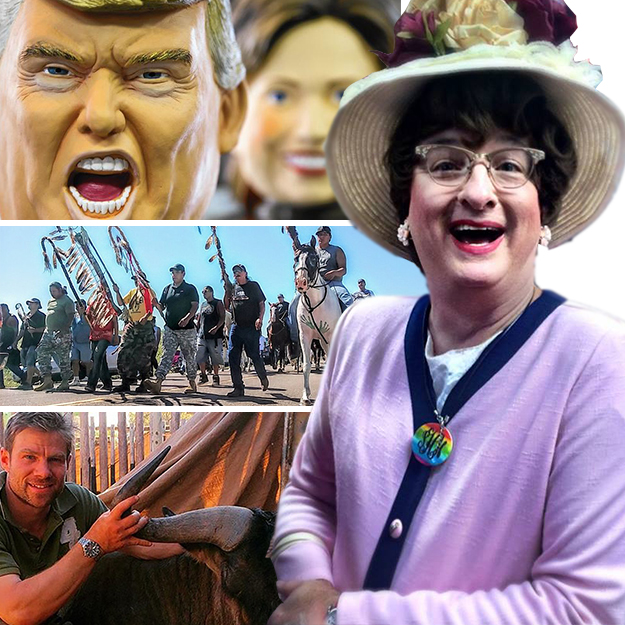 As we begin a new month, let us redouble our efforts in prayer for these worldly issues.

Scary: That filthy holiday has once again come and gone. Halloween. Where adults encourage their children to dress up as scary creatures and go door-to-door soliciting handouts of candy. Clearly a Democrat creation. All the goblins. All the ghosts. It’s just all too underworldly for me. Worse yet, adults who are trying to drag parts of their childhood with them have found pleasure in dressing up as scary current event characters. Brothers and Sisters, we already have ONE Donald Trump and ONE Hillary Clinton. Do we really need more? Let us pray.

Sacred: Billionaire Kelcy Warren, based here in Dallas, apparently doesn’t have enough money, so his Energy Transfer Partners is building a pipeline through sacred Native American land in North Dakota, and the natives are fighting back. I just don’t get it. When the Pilgrims took over land from the Indians in the 1600s, everyone sat down for turkey dinner to celebrate. Why can’t these Dakotans reach a compromise? Don’t they realize oil is sacred in America? Of course, if some Navajo tries to set up a teepee on the grounds of First Baptist Church, heads will roll!

Sick: Well, this is just FILTHY. A veterinarian in the UK has contracted bovine tuberculosis from a wildebeest he met in South Africa. I KNEW that once we let sodomites and lesbyterians get MARRIED in this world, animal relationships would quickly follow. Repent, people!