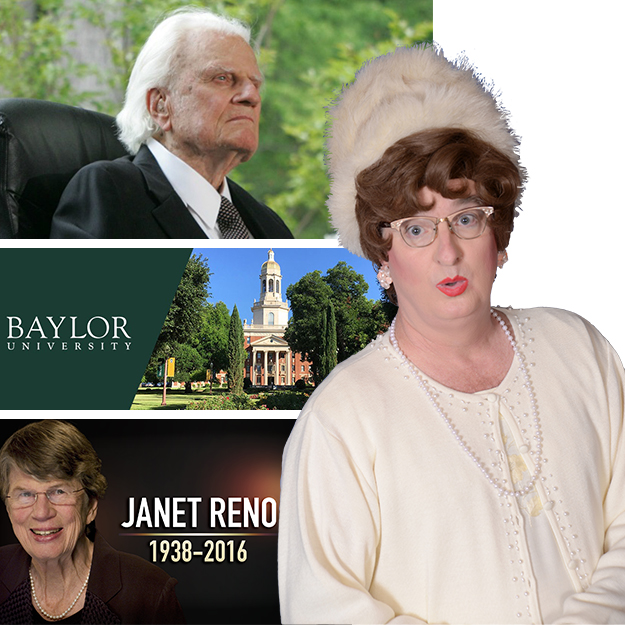 Turn your hearts and minds away from all things political and let us focus on these Christian thoughts.

Billy: God keeps the faithful alive. Our precious evangelical leader, Billy Graham, turned 98 years old this week. Glory! Of course, he’s nowhere near Methuselah’s 980 years, but Brother Billy is an example of how the Lord shows his power by keeping the faithful alive. To further validate this point, let me remind you that Oral Roberts, Jerry Falwell, Rex Humbard and Tammy Faye Bakker are all dead. Let us pray that Pat Robertson gets the heavenly phone call soon. Amen.

Baylor: As most of you know, I received my religious training at Baylor University, aka Jerusalem on the Brazos. Baylor continues to pride itself as the largest Southern Baptist University in the world, and touts its morality with this statement on its website, “Baylor holds firm to the conviction that the world needs a preeminent research university that is unambiguously Christian….”  What a blessing, then, to read about the recent incidents of sexual assault on the grounds of this hallowed institution. To hear about the Board of Regents encouraging assaulted women to keep silent. To see how a Baylor football fan, after reading that an advocate for women’s safety had called for the remainder of the football season to be cancelled, marked a tweet to her with #uracunt. Brothers and Sister of Baylor, perhaps we should remove “unambiguously” from the website. Pray about it.

Burial: Finally, let us bow our heads in memory of a fine Christian woman who has gone on to her greater glory. Sister Janet Reno, our first ever female Attorney General, passed away over the weekend. I rejoice that this fine woman, who was so faithful to her country that she never married, was a towering example of fortitude and strength of character. My only regret is that, there were many times when I was making a public appearance somewhere and was mistakenly identified as her. With all due respect, I don’t see the similarity. I mean, Sister Reno, bless her heart, looked like a man in a dress. I’m MUCH more delicate.