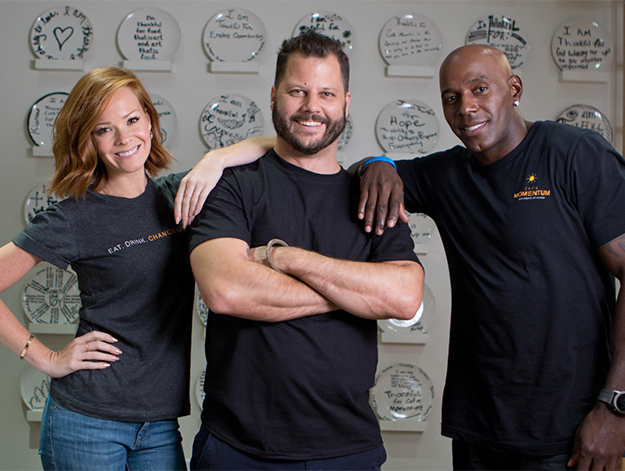 If you haven’t been to Café Momentum downtown, you’re really missing out.

And Oprah commands your attention.

The nonprofit restaurant that helps train juvenile offenders in all aspects of the restaurant business not makes a difference in the lives of its numerous interns, but the chef-driven menu keeps us coming back for more.

For a great chance to experience the top-notch cuisine and be a part of something bigger, there’s a special four-course pop-up dinner that takes the restaurant back to its own pop-up roots.

On Wednesday, November 30, diners will enjoy the multi-course meal followed by a complimentary screening of an episode from the Oprah Winfrey Network’s docu-series, The Hero Effect, in which Café Momentum was featured.

Chef Chad Houser (pictured above center with Emily Wilson and Donald Driver co-hosts of The Hero Effect) and his team have created a work environment at the downtown eatery that’s one of inclusivity and respect. The bully-free zone teaches the interns to respect everyone, regardless of gender, race, background or anything else that makes someone different. At least two interns since opening have identified as LGBTQ so the lessons these young men and women are learning will help make the world more tolerant.

And that’s why we love Café Momentum so much.

That and the fried pies.