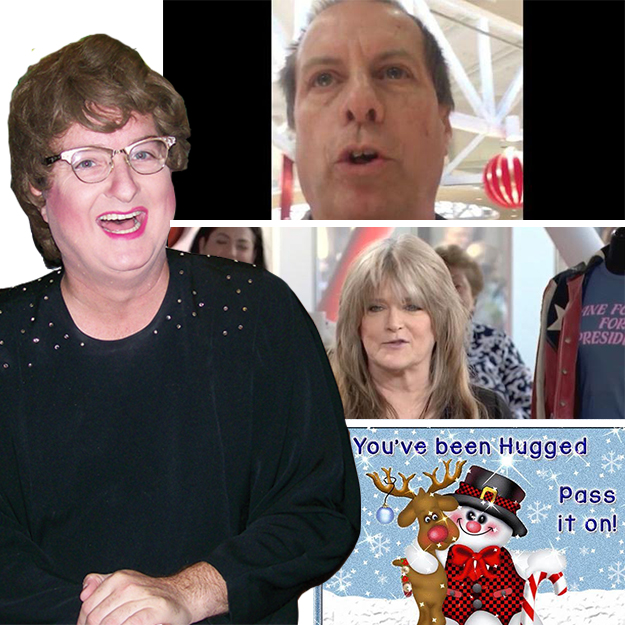 Why must I have to rebuke during this joyous season?  Read on and understand.

Fraud: A “preacher” in Amarillo, Texas recently staked out a spot near Santa Claus at a local mall where he proceeded to heckle parents and children alike for their belief in the bearded fat man. The fine pastor announced such things as “there is no such thing as Santa Claus,” “Santa’s not real,” and “parents you all need to stop lying to your children and telling them that Santa Claus is real when in fact he’s not.” I’ll admit that Santa is an anagram of Satan, but this screamer was trying to stress that the REAL reason for Christmas is Jesus Christ. Well AMEN to that. However, I say suffer the little children to come to Santa. Then maybe that childhood belief will transform into a faith appropriate enough to accept the reality of Christ, even though the big JC doesn’t set up shop in the Mall for His birthday. Praise!

F****t: More grief from the Brady family. Is it not bad enough that we’ve lost Florence Henderson in the last month? NOW comes news that little lisper Cindy Brady has been fired from her radio show in Los Angeles after going on a rant against a known sodomite. (Sung) “Here’s the story of an angry lady.” Apparently, “grown up Cindy Brady” who is now known by her birth name, Susan Olsen, is quite the Trump supporter and took issue with a homosecular who challenged her for spreading “outrageous information” and being “dangerous and unprofessional.” To which Sister Olsen unleashed a string of filth which included the “F” word. You know, the one which can also describe a bundle of twigs. Let us gather to pray for Miss Olsen before her TV mom rises from the grave to slap some sense into her or push her down those mid-century, open stairs in the house!

Finger: I have had it with the crap that is spreading through my Facebook account like burning trash in a trailer park. I keep getting these holiday greetings in my mail which tell me to “hold my finger on it and forward to a friend.” Brothers and Sisters, I have absolutely no intention on putting my finger on anything which might be passed on to a friend. I did that once during a private anointing service and now 14 of my followers have herpes. So let me say this in all Christian love. STOP IT! Merry Christmas.