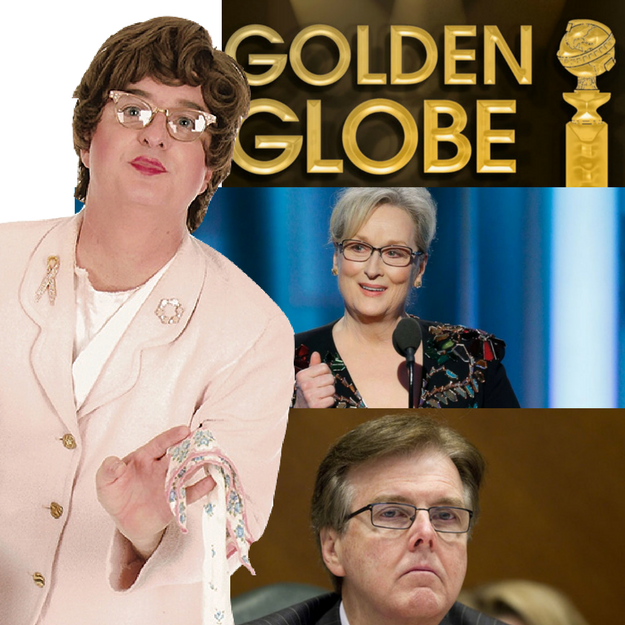 I am on FIRE this week. Handle with care.

Designers: Lord help us! Hollyweird awards season is upon us. Famous women pushing the envelope of good taste with gravity defying dress disasters, famous men thinking that a tux will excuse bad grooming, and all of them trying to look like
they’re glad to be there. I watched the first parade of filth this weekend on the Golden Globes. I’d like to remind all these hussies parading their own “globes” on the red carpet of one thing. As an upright Christian woman, I am clothed in the garments of holiness, which outranks your rancid designer for all eternity. Who am I wearing? THE LORD ALMIGHTY!

Declarations: Speaking of the Golden Globes, it was refreshing, for a change, to not witness any train wrecks of inebriation at the microphone. While I had to contend to the occasional sodomite spousal greeting, speeches were rather innocuous. Then Meryl Streep stepped up to the pulpit. Many would assume that, as a woman of faith, I would be repulsed by the liberal fawning of the Hollyweird elite. However, my faith in Donnie Trump as anything even REMOTELY resembling Christianity is weak, at best. So, brothers and sisters, after Sister Streep declared her testimony, my living room was echoing with the hearty “amens” of a host of believers. To summarize, Sophie made the right choice, cleansing the President-Elect with a Silkwood shower of words which would run animals Out of Africa sending Postcards from The Edge of the Bridges of Madison County during The Hours of Doubt left before the Devil Wears Prada to The Iron Lady’s descent Into the Woods. Mamma Mia!

Deviants: Finally, the men in power of my home state of Texas have made a bold move.  Rather than having to pass any resolutions which might feed the poor, heal the sick or clothe the naked, our Lt. Governor is rushing post-haste into a proposed bill which would needlessly implement regulations over where people pee. Now, I have enough worldly knowledge to know that the issue of allowing people to use the bathroom of their own identity, regardless of birth certificate identifying marks, is NOT meant to allow Uncle Miltie to pee next to your fifth grader. The transgender people I have met are not perverts parading in slacks or skirts trying to cop a feel or grab a glimpse in the can. Besides, where’s the bill to prevent Texas ranchers from violating the sheep on their land? May these deviant lawmakers get their minds OUT of the gutter and back into more important issues like what sodomites do in their bedrooms and the policing of female genitalia. Amen.