Even though it’s still January, things are about to get scorching hot.

If you’re like us, you typically wait until summer on the beach to get your fill of sexy tales of romance and young gay love, but we think curling up in front of a fireplace with this very kind of book might be an even better idea. Especially with the chilly forecast for the weekend ahead. 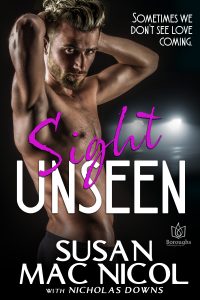 There’s a steamy new novel out today called Sight Unseen that will do just the trick. Plus, it’s just a $3.99 digital download at Amazon.com so you can get some instant literary gratification.

The novel by Susan Mac Nicol is based on an idea from L.A.-based actor and producer Nicholas Downs about Cody and Nate, two 17-year-old guys who find undeniable chemistry and a deeply intimate connection over a weekend in the Florida Keys. (Funny how tropical locales will do that!)

After a sudden split at Nate’s directive, the two manage to remain friends over the years, even as they both embark on relationships with other men. When a shocking event brings them back together, they are forced to face their past and try to figure out what the future holds for the star-crossed lovers.

Just think of the money you’ll save on the heating bill.