Just take a good long look at that image above.

And an airline ticket. 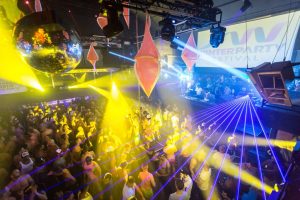 The week-long schedule of singing, dancing, drinking and generally having a gay old time in the warm Florida sun has a bigger purpose than merely supporting the glitter and glowstick lobbyists in DC. No, in addition to all the fun and frivolity, participating in the Winter Party Festival helps fund South Florida LGBTQ organizations, as well as the National LGBTQ Task Force.

It’s shirtless shenanigans for the greater good. Highlights this year include multiple dance parties; a VIP cocktail reception on the New World Center rooftop; a massive pool party with DJs Dan Slater and Kitty Glitter; an art showcase; and the epic, world-famous Beach Party with DJs ROSABEL getting the party started and keeping it going all night long.

Hotel rates increase on February 11, so book your stay as soon as you can. Individual event tickets range from $30 to $225 (or in the thousands if you want super-VIP experiences), so we recommend snagging those as quickly as possible, too.

Because nothing’s sadder than standing in a Speedo and thigh-high boots on the wrong side of the velvet rope.