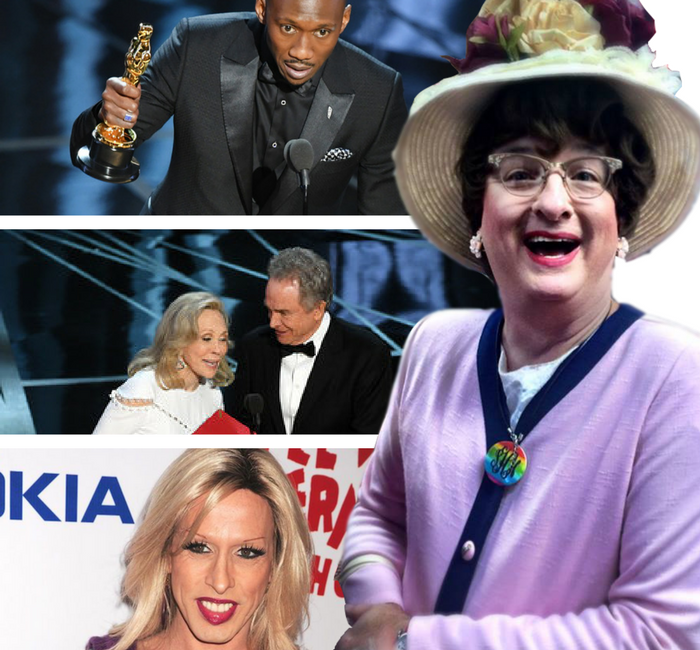 Cinematic trash was on full display this past weekend. Here are my Christian thoughts on the Oscar cavalcade of filth.

Oscar. Mahershala Ali (no relation to the famed boxer of same name) was recognized with an award for his work in MOONLIGHT, a filthy film about black sodomites. I had to view the film in the privacy of my home lest a fellow Baptist see me at the theater openly witnessing such filth. I now read that Brother Ali’s win makes him the very first Muslin to win an Oscar. Who cares? I mean, why should we care the cotton composition of his shirt and underwear? Lord, help us.

Oscar. Proving once and for all that Hollyweird is NOT above reproach, the biggest Academy Awards snafu since a naked man pranced in front of David Niven befell the proceedings on Sunday night. You’ve heard by now that aged BONNIE AND CLYDE stars, Faye Dunaway and Warren Beatty, erred in announcing the wrong film as the Best Picture Winner, thus simultaneously embarrassing LA LA LAND and robbing MOONLIGHT of its moment in the sunlight. Bless their hearts. Now if we could just discover that Warren and Faye are also members of the electoral college, we could make a few needed adjustments elsewhere. Amen?

Oscar. Finally, political correctness was dealt a blow with the omission of a transgendered actor/actress/person in the In Memoriam salute to dead people. Alexis Arquette, neé Robert Arquette, member of the famed Arquette family in Hollyweird and grandchild of Hollywood Squares denizen, Charley Weaver, passed away this past year. Apparently, the Academy couldn’t bring itself to honor a person who changed their gender mid-career. Look, I don’t really have a dog in this hunt, but let’s face it: If Faye Dunaway can change her FACE so drastically and still be asked to present an award and then not even be able to get THAT right, I don’t see the fuss over honoring someone whose unrecognizableness is hidden in some undergarments. Vive la différence!