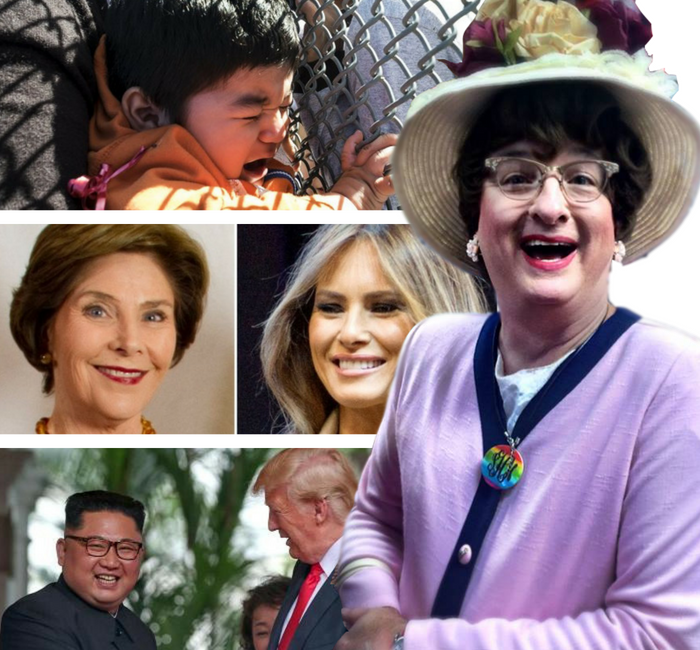 Things are getting serious. Circle the prayer wagons!

Chipotle. I’ve been thinking. Our Lord and Savior said many things which deserve recalling these days. “Suffer the little children to come unto me.” “When I was a stranger, you invited me in.” “Blessed are the persecuted.” And so forth and so on. How then, are so many professed Christians praising God and Donald for the persecution of immigrant strangers resulting in the suffering of children kept from Love? Oh, Brothers and Sister, I’ve heard the arguments for these adults being common criminals who would be kept from their children if they were incarcerated for murder. But we’re talking a misdemeanor of immigration issues. And hear the cry of the mighty who proclaim that these illegals are taking our jobs. Brothers and Sisters, until I see some privileged white Christian teen busing tables at a Chipotle, I’ll prefer to let that argument die an ugly death. Finally, isn’t it true that we are all illegal immigrants, descendants of Mayflower denizens who illegally entered the lands of the Americans here long before Plymouth Rock? Jesus wept.

Children. While I’m on the subject of incarcerated children, let it be emphasized that former and current First Ladies are proclaiming the indignation of this practice. It’s not the first time Sister Melania has side swiped her husband and it won’t be the last, but bless her for expressing her disdain for what is happening. And verily let me say unto all of you, when you incite the ire of Sister Laura Bush, a mild-mannered former librarian and former resident of 1600 Pennsylvania Avenue, things are going South. After all, she is a Texas woman, and when a Texas woman says “Oh, HECK no!”..…poop is about to hit an oscillating fan. Praise the Lord, Y’all!

Chums. I am trying to make sense out of all this camaraderie between Brother Donald Trump and Brother Kim Jong Uno Dos Tres. I believe in spreading the gospel to all parts of the globe, but there just seems to be certain risks involved with getting chummy with such a ruthless leader of a nation. (And I’m talking about Trump getting chummy with Kim, although the other way around might make the same sense, but I digress.) It is my fervent prayer that some good will come to all the citizens of our fine country as a result. If Sister Oprah can give away a Pontiac to everyone in her studio, I believe that Trump ought to negotiate a deal for all of us to get a Kia! Amen?