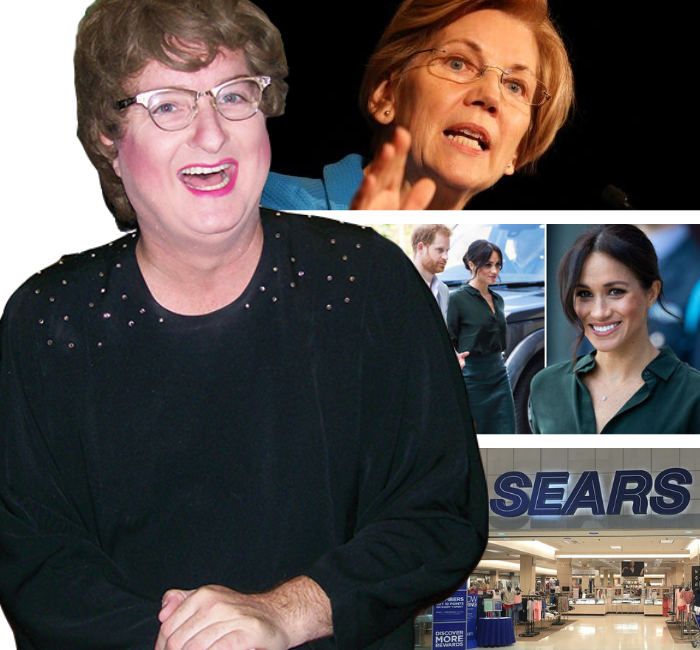 We have a broad spectrum of concerns this week.  Join me on your knees, won’t you?

Squaws.  Not having Sister Hillary Clinton around has left a void in the liberal stratosphere.  Then comes Sister Elizabeth Warren.  Regardless of her politics, the good Sister practices a convincing narrative.  I just don’t understand why there’s all this fuss over whether or not she has Indian heritage (teepee, not 7-11).  Or why President Donny dared her on a million dollar bet to prove it.  Doesn’t really matter now.  DNA is in and it seems that Betty Warren’s ancestors have indeed made some turquoise jewelry.  Not surprisingly, DT has claimed no memory of his promised payment.  All I hope at this point is that the Warren Squaw will divine a Native American name for the commander in chief.  And personally, I’m praying that “Lying Jackass” is still available.  How!

Storks.  Well, THIS news didn’t take long.  Prince Harry and the Immigrant Princess have announced a stork arrival for the Spring.  I’ve had my abacus out to do the math.  Married in May, due in the Spring.  It checks out.  But it seems that the home fires at Kensington got lit awfully quick.  And then there’s the potential birth date.  England voted to leave the European Union effective March 29, 2019.  If the baby and the country both make their exits simultaneously, does this necessarily ensure that Number Seven In Line To The Throne will be named Brexit?  Let us pray.

Signs.  Another true sign of the apocalypse is upon us.  The place where America shops for value has declared bankruptcy.  What shall I do without Sears & Roebuck?  Where else can I get a Lady Kenmore washer?  Sister Jaclyn Smith will be without a distributor for her tasteful fashion.  Lesbyterians will lose a source for Craftsman tools.  And without a Sears catalog, what shall our mission church in Kentucky do for toilet paper, or what shall underage sodomite saplings do without the men’s underwear ads?  To say nothing of many small town evangelists losing a source for polyester separates.  It’s all just too much.  Time marches on, Brothers and Sisters, so stay woke.  One more sign of the end times like this and I’ll be looking skyward!