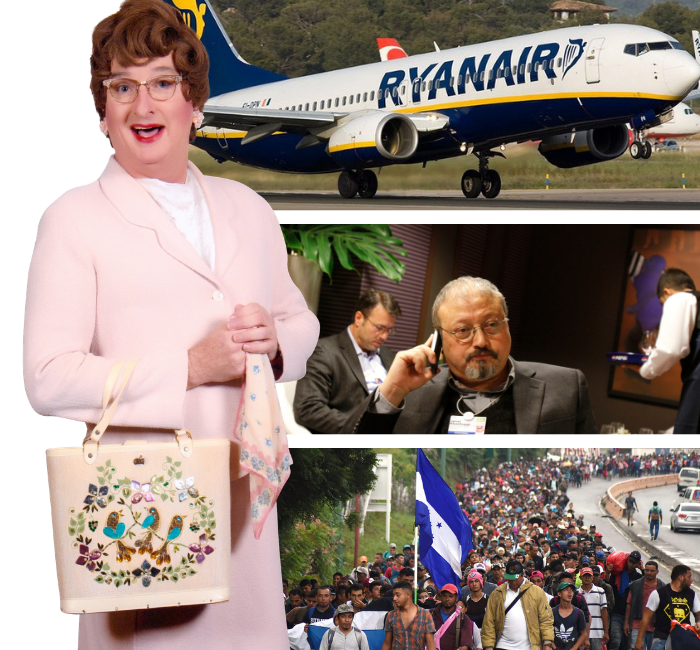 I have turned my gaze abroad for this week’s ministry. Join me at the throne of grace.

Trash. Oftentimes, my mission trips require me to travel by air. As a woman of faith, it is imperative that I be as thrifty as possible with such air travel regardless of who might be seated next to me on the way. The ultimate in discount travel in America has got to be Spirit Air, where every extra fee you are charged sends you crying out for the Holy Spirit. For foreign mission trips, I have found that the European equivalent is RyanAir (so cheap, there wouldn’t pay the typesetter for a space between the two words). Now, in a blatant display of the often boorish cheap travel clientele, a man on a RyanAir flight from Barcelona to London was caught on video BEFORE THE FLIGHT LEFT in a racist rant against a woman of color seated next to him. Really tacky. Un-Christ-like. To make matters worse, RyanAir allowed the offender to stay on the flight. Proving once and for all that RyanAir won’t even spend the money to empty the trash from its flights. Bon voyage!

Treachery. I can honestly say that the Lord has heretofore not yet led my ministry to the country of Saudi Arabia, although I have laid hands on a few Egyptians behind a pyramid, but I digress. Apparently, I won’t be taking the message of love to the Saudis (or Turks, for that matter) anytime soon either, even though it is much needed. A Saudi reporter, long critical of the Saudi government, was recently slain inside the Saudi Consulate in Istanbul. Now that it has reached an international crisis, the crown prince of SA stepped off his golden toilet long enough to have this minions pronounce that the killing was a huge mistake. How does one say “oops” in Arabic? Brothers and Sisters, be ye fortified in the faith here at home. Dissident voices must not be accidentally be silenced in this country, even though our crown idiot in chief is trying. Speak. Proclaim. Testify. Vote. Amen?

Travelers. Now, in a moment of compassion, I must turn my gaze to the South where thousands of the less fortunate are fleeing the grips of corruption and violence in their homeland and making their way north. To where? I honestly don’t think they’re heading to a beach in Cancun. Which leaves us the assumption that the oppressed are bound for America. No one has coughed up the funds for a wall in South Texas as of today, and the Barney Fife Memorial Border Patrol can’t pick off this mass caravan. Which leaves us in a quandary. How are we, as an alleged Christian nation, going to respond to these strangers in our land? I don’t have an answer, but brothers and sisters, I suggest we get on our knees now for guidance. In the meantime, I’m left to ponder the atrocities they are leaving in Honduras. It must be bad if they’re traveling this far just to be hated by a large percentage of White Christians with Selective Scripture Recall. Let us pray.