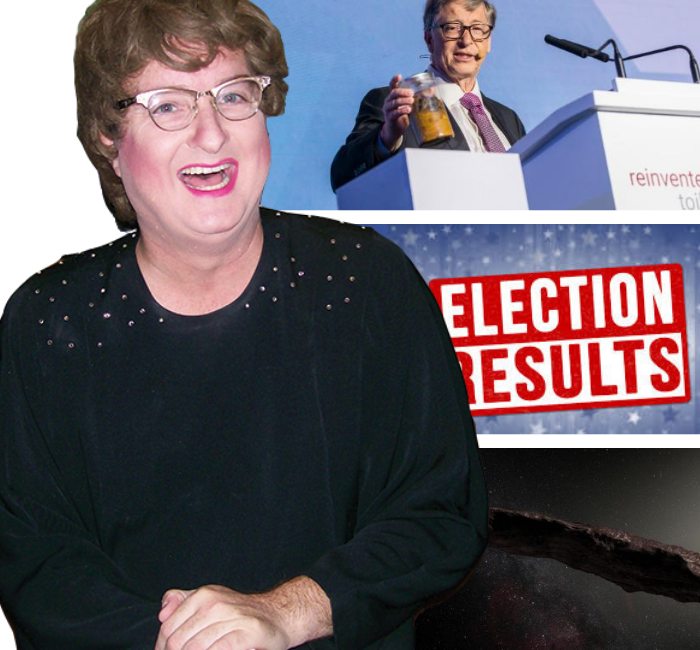 It’s been a trying week.  Let us gather in prayer.

Privies.  Here’s an item of interest.  Brother Bill Gates, founder of Microsoft and bazillionaire, has begun an initiative which was introduced at his Reinvented Toilet Expo in Beijing.  He wants to commercialize futuristic toilets that don’t need water or sewers.  But wait, there’s more.  In his presentation, he came out onstage with a jar full of poop to illustrated just how much filth and bacteria in that small jar.  Gates chose to sell his pitch in China, where they have struggled with clean sanitation.  Let’s break this down.  Bill Gates takes a load of doo doo to a bunch of people in China because they’ve been eating too much Moo Goo Cat Dog and don’t have enough privies to evacuate the detritus of this cuisine.  Proving once and for all that some people have so much money that they can truly give a crap.  Praise!

Prayers.  By the time you read this, the results from the midterm elections will be in.  I think that today is a perfect time for prayer.  If your election hopes have been fulfilled, cry out in praise and thanksgiving to our Lord!  On the other hand, if you are rending your clothing over a loss, fall to your knees in prayer for comfort.  Either way, I pray that you will take my lead to be in prayer for our country and all of its new leaders.  Rejoice with me in knowing that the Lord will sustain us through all outcomes.  And, like me, pray that no one will grind their teeth to a stump in the process.  Glory!

Probes.  Finally, there’s this.  Two scientists at Harvard have stated in a research paper that an “inhuman” item seen via telescope hurtling through space is most likely some sort of probe from an ancient alien civilization.  (Or, perhaps, something dislodged from Bill Gates’ jar in Beijing.)  Nonetheless, the paper was written by Abraham Loeb, professor and chair of astronomy, and Shmuel Bialy, a postdoctoral scholar, at the Harvard Smithsonian Center for Astrophysics.  I’m going to make a hypothesis that, based on the authors’ names, there was a bit too much LSD or crystal meth packed into a jar of gefilte fish at the kosher deli in Cambridge.  Oy!