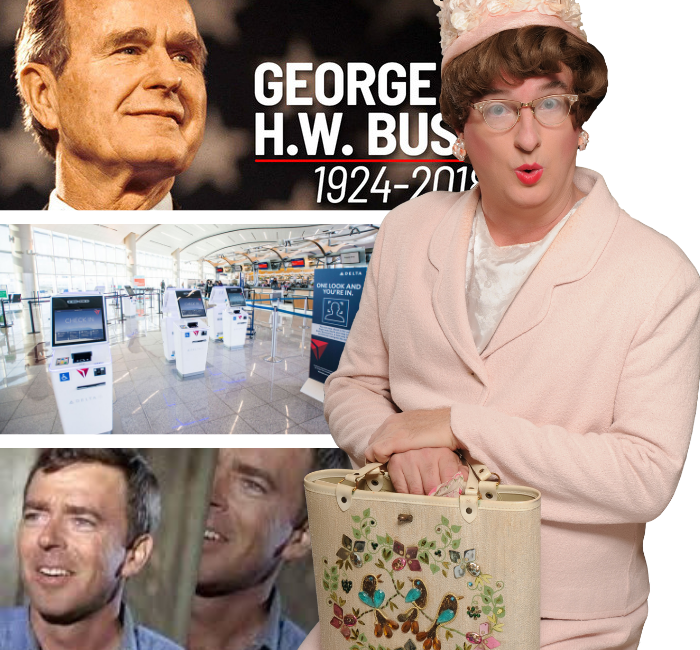 It’s time for this week’s reflection.

Remember. Let us reflect upon the loss of the 41st President of our country. After the leadership we have experienced the last two years, it is necessary to recall the statesmanship as well as the highs and lows of George H.W. Bush. His bravery in WWII. His business successes. His kindness to Bill Clinton during succession. The Iraq War. Replacing Thurgood Marshall with Clarence Thomas on the SCOTUS. And, of course, his laughter and condescension about the AIDS crisis. Good times. As we remember, remember it all, Brothers and Sisters. Remember it all.

Recoil. When I have to fly to a mission field, I am always challenged in my faith when it comes to TSA and airport security. It is downright disgusting to have some minimum wage earner feel my support hose. Unless I can hijack a plane with the Word of God, I’d say I’m clear. Now, to my delight, Delta Airlines in Atlanta has instigated face recognition at TSA checkpoints. By simply looking into a screen, all of us pre-approved safe fliers will be recognized and passed through. What a blessing. I’m just going to have to ensure that I look my best when flying. The last thing I need to hear when I look into that screen is a face activated recoiling scream. Praise!

Rest. One final obituary notice. Actor Ken Berry has passed at the age of 85. While he was known for such family fare as F-Troop, Mayberry RFD and Mama’s Family, he was also an accomplished singer and dancer who had appeared on Broadway stages as well as The Judy Garland Show. Now, you KNOW where this could be leading, but I’m relieved to know that he is survived by his first wife, Sister Jackie Joseph-Lawrence and his companion of 26 years, Susie Walsh. Susie. That’s a woman. Praise the Lord for good looking, tap dancing non-sodomites. Rest in Peace.