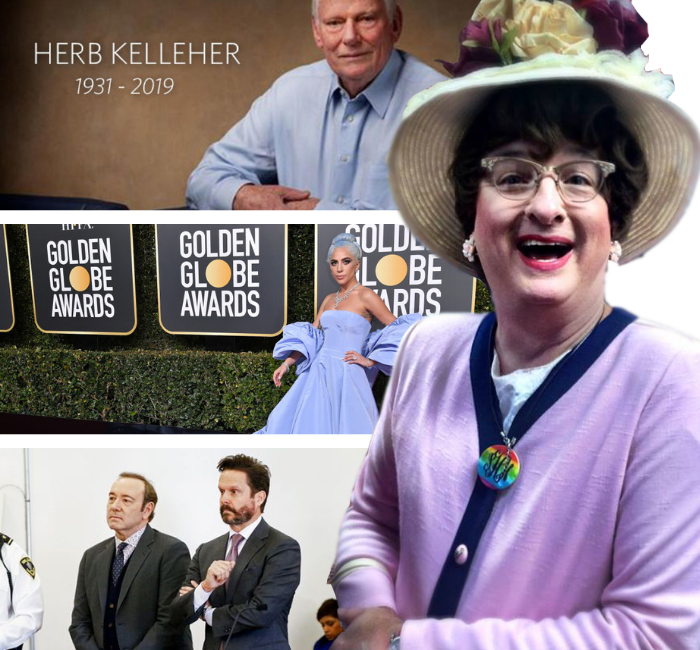 Another year, another start, another set of stories.  Bow your heads.

Glory.  Let us grieve as one, Brothers and Sisters.  A man of great business stature has passed away.  Brother Herb Kelleher, founder of Southwest Airlines, took his last flight to glory last week at the age of 87.  I have heard testimony from his employees as to his graciousness, his sense of humor and his fostering of a pleasant work place.  He single-handedly revitalized the peanut market.  He encouraged humor among the ranks on the ground and in the air.  And he revitalized lowly Love Field in Dallas into a thriving air terminal.  Therefore, I choose to remember these things rather than reflecting on his perverse insistence that the early 1970s stewardesses be clothed in very little, save for hot pants and go-go boots.  Filthy.

Globes.  Sit tight, Sinners.  Hollywood awards season has begun.  I was unwilling to witness the actual telecast of the Golden Globes on Sunday night as my faith had been tested enough in the new year.  However, I have gleaned facts and stories from the evening’s debauchery so that I may proselytize on its content.  Sister Gaga brought new meaning to being a blue-hair and was heard several times cursing out others who stepped on her dress.  (Less is more, Lady.)  Sister Carol Burnett showed us what class looks and sounds like in accepting her eponymously named award.  Sister Glenn Close gave emotional testimony regarding women in ministry, no matter the calling.  And sodomites across the land are in a tizzy over A STAR IS BORN losing to some Queen.  I don’t get all of this, but I only report the news.  Let us pray.

Gloom.  That Sissy, Spacey, is back in the news again in a cloud of gloom and doom.  The filthy pervert appeared in court in, of all places, Nantucket, Massachusetts, this week regarding charges that he groped an 18-year old male restaurant worker in that resort area.  Now, I personally have never experienced a ministry of touch with little Kevin.  However, others close to my ministry have testified as to his proclivities towards them.  Normally, I would suggest that we get on our knees for Brother Spacey, but I fear this could only lead to more problems.  In the meantime, I suggest that we pray from afar for his soul, lest he become just another lyrical “Man from Nantucket”.  Hallelujah!